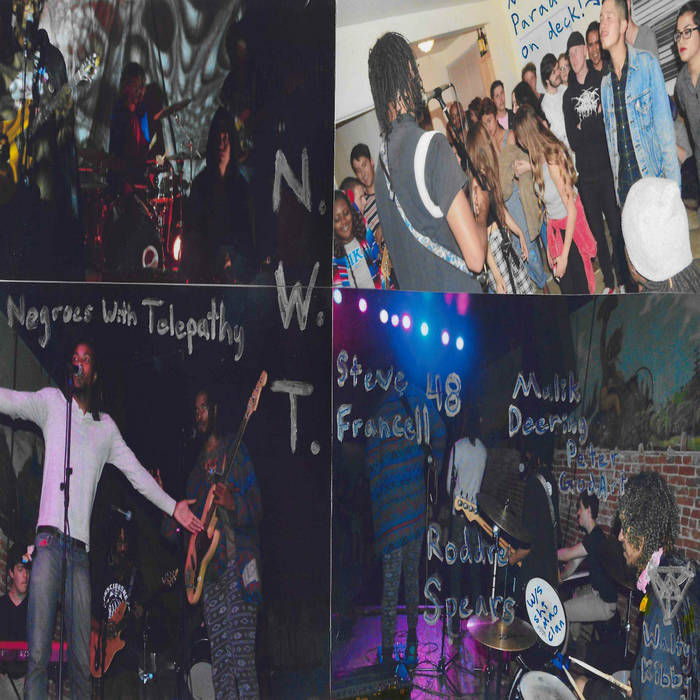 easykill01 Experimental jazz funk hip hop. It's as incredible as it sounds, and they have to chops to back it up. This album is dripping with charm, talent and innovation, and it's dense as hell. They took groundwork they established on the first album and perfected it. I was excited when I saw this had dropped, and it surpassed all expectations. Just awesome!

savageidiotmoron Loved the first album, but the boys really cranked it up to 11 here. The ultimate fusion of funky dankness. Favorite track: Kai's Funky Revenge.

We believe this album is both a culmination of the tumultuous yet vibrant three years we spent writing this record. It invokes a sense of nostalgia yet this subtle sense of dissonance in both musicians and listeners. We met our keyboardist, Peter, in 2016, and from there he's influenced our musicianship and song writing as a band bringing forth half the songs on this album.
This album represents the changes we've gone through in our musical and personal lives. It's really just about being with your friends, making music, getting mad crossed out of your mind at friday practices and writing a tasty groove, jumping for joy at said groove, getting happy getting pissed; Wanting revenge for your homie Kai- love that dude, whoever he is.

Special Thanks:
Big thanks to everyone who's attended our shows, crowd surfed, moshed, took pics, hung out and everything. Shouts out to the Cotton Ships crew, the love tribe crew, the leimert park homies, anyone whose venue we've played at, anyone whose given a fuck enough to help us get to shows when we didnt have cars(scotchy boy), cheese for throwing that show in his place around the corner from the art gallery in culver when they shut it down. Shouts out to Jim freaking Smith for holding down one of the most solid venues in all of LA The smell. Thanks to all the homies who witnessed us in our weird points. Big shouts out to Matt Parada for literally being the homiest of all homies. Shouts out to Sarah who we met at noise in the hood(shouts out bearcap and chasity). Shouts Out & R.I.P to Norm Maxwell, Steve's dad big steve and anyone we've lost this year. Thanks to Colin in Arizona for his support and for providing a recording space while we were in town. Shouts out to Dirty Walt, Charlo Crossely, Lonnie & Arik marshall, who inspired us in the first place and encouraged us to keep going.

Keep kicking ass out there all of you. Much Love & Peace.
Hope ya'll enjoy dat new Negro G!

Negro Galacticus is a musical collective hailing from the West of the West Side of the world. Music ranges from Jazzy Funky Hip Hop to Skankin Rock. Very experimental. Each member has unique influences that meld into this group.
Embark on a musical journey of mix matched tastes with us! :)

Track Name: Funky Hydraulic Monster
How many insta-hoes you know that
flex on that hashtag- relationship goals?
It's cold, when you aint gotta
comforter made from cotton or human skin
blood bones and organs it's so easy
to pretend to let go. But you
feel it killing you, sad psychic
with the trident my foresight abundant.
Quick bucks in your buttocks.
Trying to come up on a couple of likes
Your boy needs validation
proper motivation let my ego blast off.
Put myself on blast, turn my cell phone off.
Get back to the inner space, slow down your
breathing and your heart pace.
Slower pace, pacing thoughts.
Watch em Dissipate.
Alleviate depression, embrace you life with a
strong breath (*breathes*).
Relax muscles no flex unwanted stress
Come pass me by, let me be,
take a walk in the park.
Deconstruct reality in the dark,
& all I need are tangerines,
lucid dreams so I can be real
& I can tackle anything like
Ray Lewis & the Ravens.
Get back to the mothership.
Forgot about my Ray Bans.
Consciously channeling entities
from higher frequencies.
Got that reference point
of inevitable neutrality. Ay.
We be the Negro G,
maybe Negro 3, 6, 5, maybe 4.
That's 3 plus 1 or 2 more.
We got a dragon hidden in a volcano
living deep within the Earth's core.
You see this universal shit
really got me trippin.
See where my intuition leads me,
but I never listen.
Then I wanna criticize, try to justify
my ignorance of foresight.
But what's my alibi?
But ay, that ego dissolution
is the only solution.
Making friends with my sins
is the soul retribution.
Self loathing was a self fulfilling prophesy
that really got the best of me.
I guess I gotta be more self forgiving cuz...

Disco, Disco
Watch me fall down that rabbit hole
See I never meant for shit to get so serious
I got a little fucked up and delirious.
Baby if I was a god I'd be a non-believer,
never had a phone call
never found my receiver.
Stomping on your squadron
like Kali in new Adidas.
I'll rip off your head and
stand up on your chest like Shiva.

I got fucked up on some shit!
I guess that my intentions were irrelevant.
Never meant for shit to get so serious,
I got a little fucked up and delirious.
See baby if I was a god I'd be a non-believer.
Never had a phone call
never found my reciever.
I forgot to turn on my wifi.

Keep it real keep it real.
That's what you say.
Don't let your emotions and your feelings
get up in your way.
Of your rationalized thinking.

Keep it real keep it real.
That's what you say.
Don't let your rational thinking
get up in your way.
Of an emotional process.
...Like, don't wait until your 30 to go to therapy.

Bandcamp Daily  your guide to the world of Bandcamp

Guests include Kassa Overall and Muriel Grossman, plus an LP of the week by Van Hunt.